← PrevWallpaper – Robert Wilson
Next →Panorama Magazin – Retail of the Future 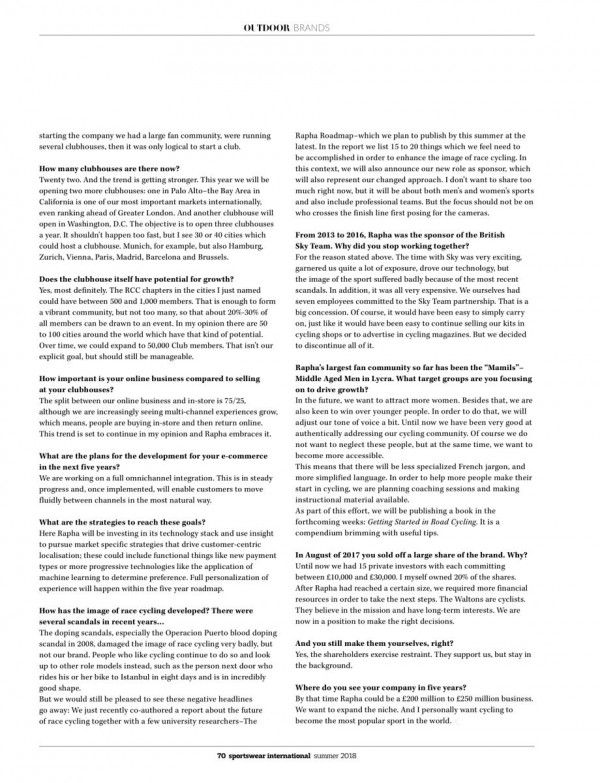 In 2004 Simon Mottram first threw a handful of cycling styles into the race. A lot of water has flowed down the Thames since then.

“You can experience truly great moments in cycling. It was my desire to also be well dressed in those moments,” says Simon Mottram, founder and CEO of Rapha, about the motivation for his involvement in the sportswear business. In 2004 he convinced marketing experts and two employees to launch the London-based cycling brand. Ever since, Rapha has enjoyed something approaching cult status.

Today London is a center of global cycling culture–and Mottram should also get partial credit for it. The Briton created a comprehensive world of experience and an empire with the dynamism of an aficionado: His company has currently 350 employees globally (280 of which in the UK alone) and generated £48.8 million in revenues in 2016, with sales increasing to £67 million in 2017. Average annual growth rates of over 30% speak for themselves.

And the secret behind the success? Mottram has managed a tour-de-force by establishing an international community, a feat that many other brands envy. He came up with the ingenious idea of opening clubhouses as service centers and as gathering places for local cyclists. At the same time these service points served as flagship stores as well. There are now 22 of them all across the globe. The Rapha Cycling Club RCC, started in 2015, now has 13,000 members. In addition to this, Rapha organizes events and exclusive cycling travel, which fuels the hype even further.

In August of 2017 the passionate amateur sportsman sold the majority share of the company to the Los Angeles-based investment company RZC for £200 million. RZC is owned by Steuart and Tom Walton, two financially strong and bicycle-crazy grandchildren of Walmart founder Sam Walton.

SI met the 52-year-old Mottram at the Rapha headquarters in London’s up-and-coming Kings Cross district to learn more about the future plans of the rapidly expanding cycling label.

Your brand is highly appealing. When looking at the images on your website, you want to jump straight onto your bike. What makes Rapha so attractive?
The brand is attractive because the sport is seductive. Emotions are inspired almost on their own and are overpowering. All we really do is put people in touch with the culture, the locations, the unique qualities of this sport. There is simply truth found in riding a bicycle. That is why our model works.

How great is the influence of the community?
At the moment and also for the next ten years, the riding community is an exceptionally important factor. And I am proud that we have successfully started such a community. Just one example: One of our female members in London was seriously ill and her friends in the RCC chapter provided her with a lot of support during this phase. I like the idea that a brand can create a sense of community. In my point of view, that is so much more interesting than simply selling clothing. Memories and friendships are what hold it together: Memories about exciting shared experiences and the friendships which evolved from that. Somebody who comes from Sydney can move to San Francisco and will be able to connect with another branch of the extended family, in other words, 1,500 fellow cyclists. All of that is worth more than any product. With us, it isn’t about likes but about a genuine, active and deeply involved fan community which is also accessible. And that is where an interesting line of demarcation runs which we have to balance out: People want to join the club and be a part of it, but at the same time, membership has to mean something and not be too arbitrary. That is one of our challenges. Especially as we grow.

Was the idea for a cycling club already there when the brand was launched?
Unconsciously, yes. From the start, our website was called www.rapha.cc. The “CC” stands for cycling club. Ten years after starting the company we had a large fan community, were running several clubhouses, then it was only logical to start a club.

How many clubhouses are there now?
Twenty two. And the trend is getting stronger. This year we will be opening two more clubhouses: one in Palo Alto–the Bay Area in California is one of our most important markets internationally, even ranking ahead of Greater London. And another clubhouse will open in Washington, D.C. The objective is to open three clubhouses a year. It shouldn’t happen too fast, but I see 30 or 40 cities which could host a clubhouse. Munich, for example, but also Hamburg, Zurich, Vienna, Paris, Madrid, Barcelona and Brussels.

Does the clubhouse itself have potential for growth?
Yes, most definitely. The RCC chapters in the cities I just named could have between 500 and 1,000 members. That is enough to form a vibrant community, but not too many, so that about 20-30% of all members can be drawn to an event. In my opinion there are 50 to 100 cities around the world which have that kind of potential. Over time, we could expand to 50,000 Club members. That isn’t our explicit goal, but should still be manageable.

How has the image of race cycling developed? There were several scandals in recent years …
The doping scandals, especially the Operacion Puerto blood doping scandal in 2008, damaged the image of race cycling very badly, but not our brand. People who like cycling continue to do so and look up to other role models instead, such as the person next door who rides his or her bike to Istanbul in eight days and is in incredibly good shape. But we would still be pleased to see these negative headlines go away: We just recently co-authored a report about the future of race cycling together with a few university researchers–The Rapha Roadmap–which we plan to publish by this summer at the latest. In the report we list 15 to 20 things which we feel need to be accomplished in order to enhance the image of race cycling. In this context, we will also announce our new role as sponsor, which will also represent our changed approach. I don’t want to share too much right now, but it will be about both men’s and women’s sports and also include professional teams. But the focus should not be on who crosses the finish line first posing for the cameras.

From 2013 to 2016, Rapha was the sponsor of the British Sky Team. Why did you stop working together?
For the reason stated above. The time with Sky was very exciting, garnered us quite a lot of exposure, drove our technology, but the image of the sport suffered badly because of the most recent scandals. In addition, it was all very expensive. We ourselves had seven employees committed to the Sky Team partnership. That is a big concession. Of course, it would have been easy to simply carry on, just like it would have been easy to continue selling our kits in cycling shops or to advertise in cycling magazines. But we decided to discontinue all of it.

Rapha’s largest fan community so far has been the “Mamils”–Middle Aged Men in Lycra. What target groups are you focusing on to drive growth?
In the future, we want to attract more women. Besides that, we are also keen to win over younger people. In order to do that, we will adjust our tone of voice a bit. Until now we have been very good at authentically addressing our cycling community. Of course we do not want to neglect these people, but at the same time, we want to become more accessible. This means that there will be less specialized French jargon, and more simplified language. In order to help more people make their start in cycling, we are planning coaching sessions and making instructional material available. As part of this effort, we will be publishing a book in the forthcoming weeks: Getting Started in Road Cycling. It is a compendium brimming with useful tips.

In August of 2017 you sold off a large share of the brand. Why?
Until now we had 15 private investors with each committing between £10,000 and £30,000. I myself owned 20% of the shares. After Rapha had reached a certain size, we required more financial resources in order to take the next steps. The Waltons are cyclists. They believe in the mission and have long-term interests. We are now in a position to make the right decisions.

And you still make them yourselves, right?
Yes, the shareholders exercise restraint. They support us, but stay in the background.

Where do you see your company in five years?
By that time Rapha could be a £200m to £250m business. We want to expand the niche. And I personally want cycling to become the most popular sport in the world.

← PrevWallpaper – Robert Wilson
Next →Panorama Magazin – Retail of the Future