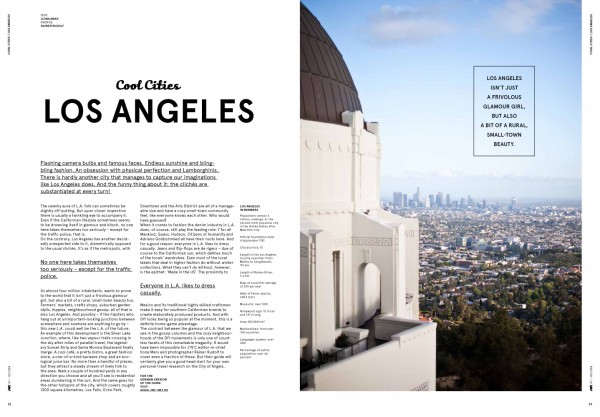 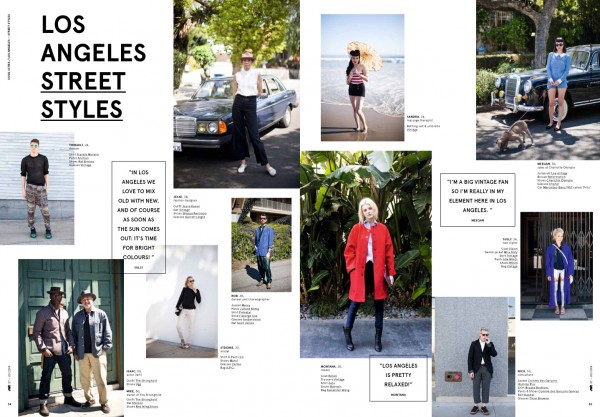 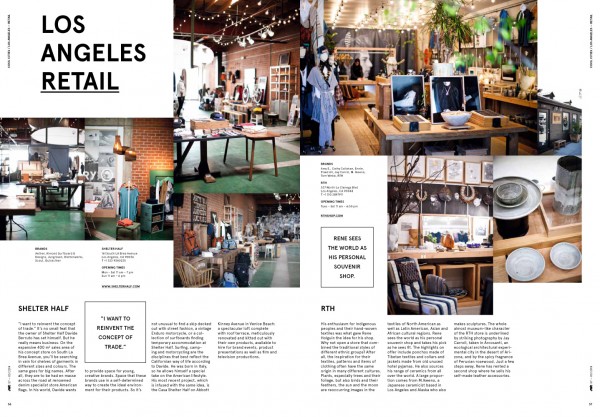 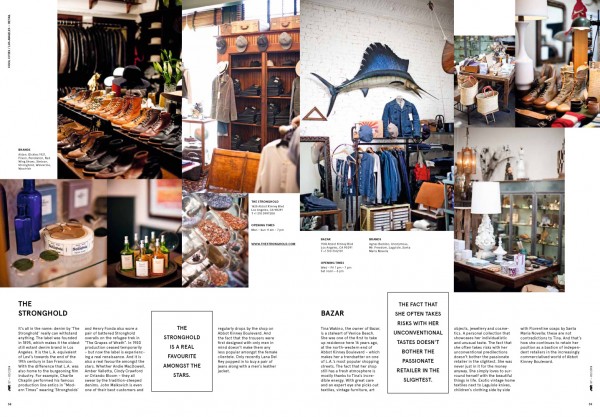 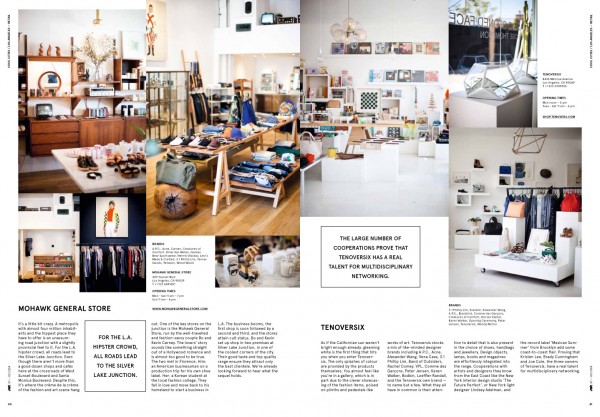 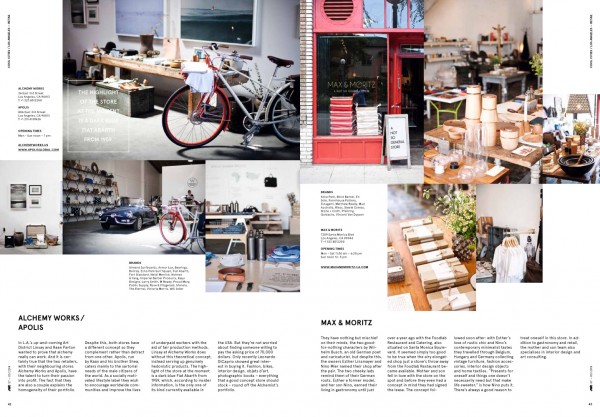 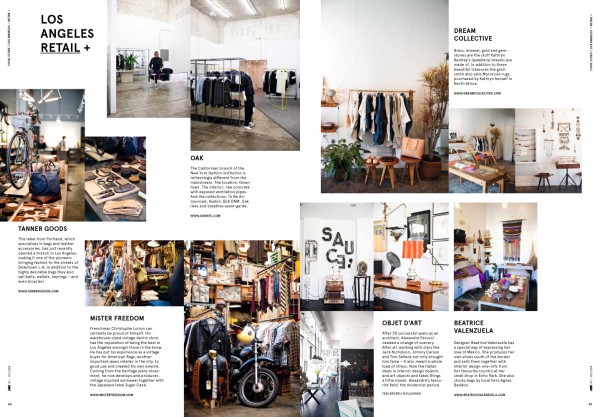 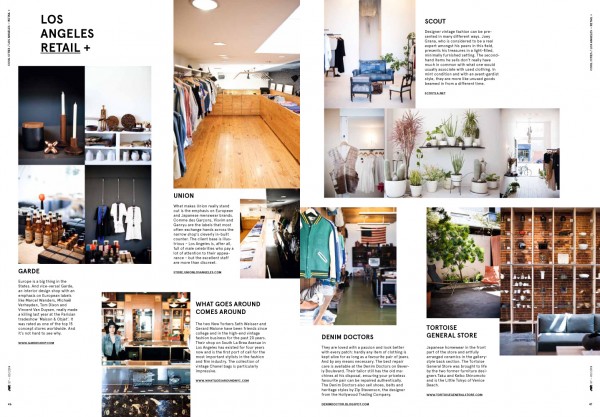 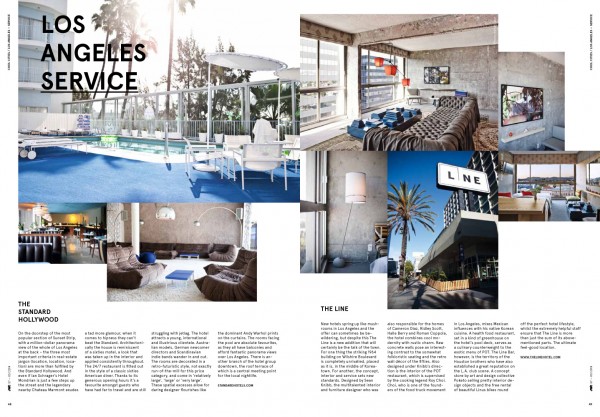 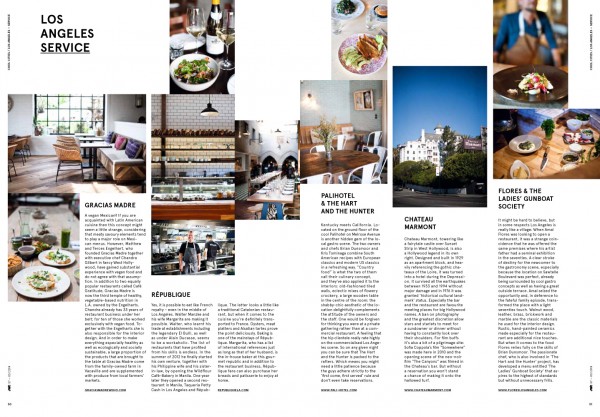 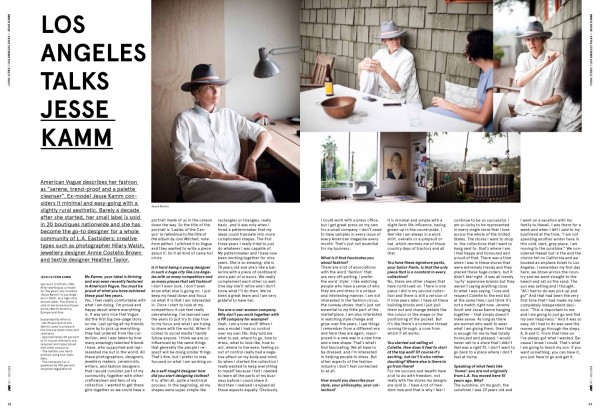 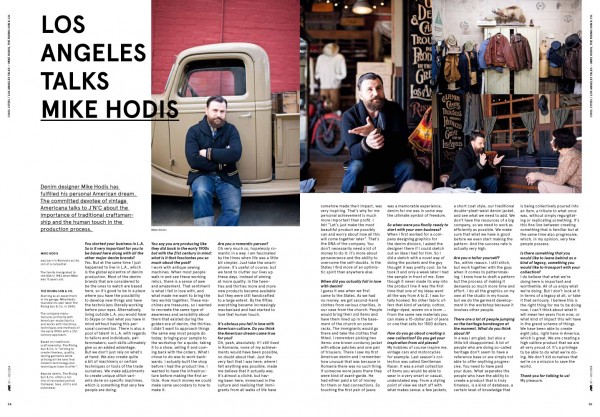 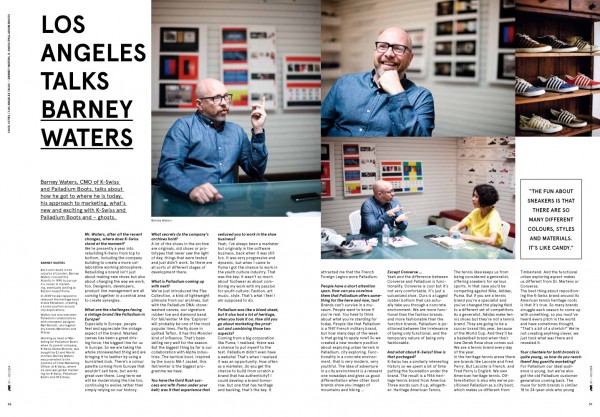 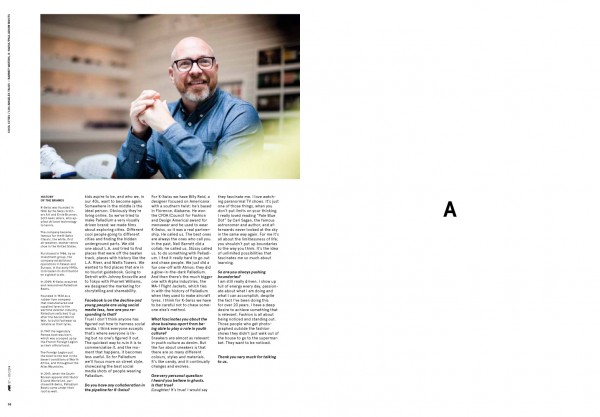 Flashing camera bulbs and famous faces. Endless sunshine and bling-bling fashion. An obsession with physical perfection and Lamborghinis. There is hardly another city that manages to capture our imaginations like Los Angeles does. And the funny thing about it: the clichés are substantiated at every turn!

The swanky aura of L.A. folk can sometimes be slightly off-putting. But upon closer inspection there is usually a twinkling eye to accompany it. Even if the Californian lifestyle sometimes seems to be drowning itself in glamour and kitsch, no one here takes themselves too seriously – except for the traffic police, that is.

On the contrary, Los Angeles has another decidedly unexpected side to it, diametrically opposed to the usual clichés. It’s as if the metropolis, with its almost four million inhabitants, wants to prove to the world that it isn’t just a frivolous glamour girl, but also a bit of a rural, small-town beauty too. Farmers’ markets, crafts shops, suburban garden idylls, hippies, neighbourhood gossip: all of that is also Los Angeles. And possibly – if the hipsters who hang out at unimportant-looking junctions between somewhere and nowhere are anything to go by – this new L.A. could well be the L.A. of the future.

An example of this development is the Silver Lake Junction, where, like two vapour trails crossing in the sky after miles of parallel travel, the legendary Sunset Strip and Santa Monica Boulevard finally merge. A cool café, a pretty bistro, a great fashion store, a one-of-a-kind barware shop and an ecological juice bar. No more than a handful of places, but they attract a steady stream of lively folk to the area. Walk a couple of hundred yards in any direction you choose and all you’ll see is residential areas slumbering in the sun. And the same goes for the other hotspots of the city, which covers roughly 1300 square kilometres. Los Feliz, Echo Park,Downtown and the Arts District are all of a manageable size and have a cosy small-town community feel, like everyone knows each other. Who would have guessed?

When it comes to fashion the denim industry in L.A. does, of course, still play the leading role: 7 for all Mankind, Guess, Hudson, Citizens of Humanity and Adriano Goldschmied all have their roots here. And for a good reason: everyone in L.A. likes to dress casually. Jeans and flip-flops are de rigeur – due of course to the Californian sun, which defines much of the locals’ wardrobes. Even most of the local labels that deal in higher fashion do without winter collections. What they can’t do without, however, is the epithet: ‘Made in the US’. The proximity  to Mexico and its traditional highly skilled craftsmen make it easy for southern Californian brands to create elaborately produced products. And with DIY looks being so popular at the moment, this is a definite home-game advantage.

The contrast between the glamour of L.A. that we see in the gossip columns and the cosy neighbourhoods of the DIY movements is only one of countless facets of this remarkable megacity. It would have been impossible for J’N’C editor-in-chief Ilona Marx and photographer Rainer Rudolf to cover even a fraction of these. But their guide will certainly give you a good head start for your own personal travel research on the City of Angels.

Selected texts from the City Guide 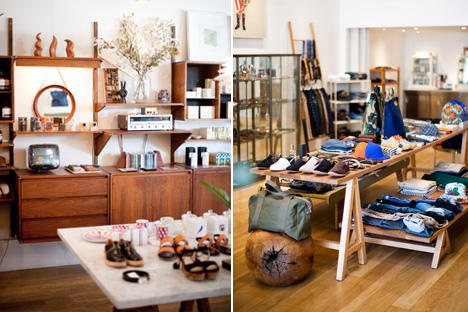 It’s a little bit crazy. A metropolis with almost four million inhabitants and the hippest place they have to offer is an unassuming road junction with a slightly provincial feel to it. For the L.A. hipster crowd, all roads lead to the Silver Lake Junction. Even though there aren’t more than a good dozen shops and cafés here at the crossroads of West Sunset Boulevard and Santa Monica Boulevard. Despite this, it’s where the crème de la crème of the fashion and art scene hang out. One of the key stores on the junction is the Mohawk General Store, run by the well-travelled and fashion-savvy couple Bo and Kevin Carney. The lovers’ story sounds like something straight out of a Hollywood romance and is almost too good to be true. The two met in Florence. Him: an American businessman on a production trip for his own shoe label. Her: a Korean student at the local fashion college. They fall in love and move back to his homeland to start a business in L.A. The business booms, the first shop is soon followed by a second and third, and the stores attain cult status. Bo and Kevin set up shop in two premises at Silver Lake Junction, in one of the coolest corners of the city. Their good taste and top quality range ensure they attract only the best clientele. We’re already looking forward to hear what the sequel holds. 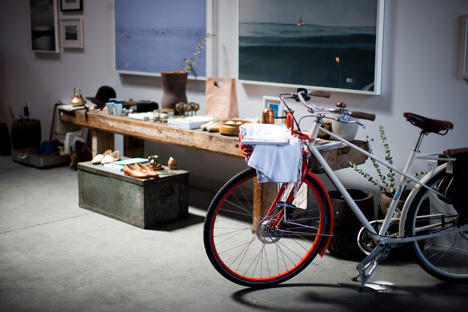 In L.A.’s up-and-coming Art District Linsay and Raan Parton wanted to prove that alchemy really can work. And it is certainly true that the two retailers, with their neighbouring stores ­Alchemy Works and Apolis, have the talent to turn their passion into profit. The fact that they are also a couple explains the homogeneity of their portfolio. Despite this, both stores have a different concept so they complement rather than detract from one other. Apolis, run by Raan and his brother Shea, caters mainly to the sartorial needs of the male citizens of the world. As a socially motivated lifestyle label they wish to encourage worldwide communities and improve the lives of underpaid workers with the aid of fair production methods. Linsay at Alchemy Works does without this theoretical concept, instead serving up genuinely hedonistic products. The highlight of the store at the moment is a dark blue Fiat Abarth from 1959, which, according to insider information, is the only one of its kind currently available in the USA. But they’re not worried about finding someone willing to pay the asking price of 70,000 dollars. Only recently Leonardo DiCaprio showed great interest in buying it. Fashion, bikes, interior design, objets d’art, photographic books – everything that a good concept store should stock – round off the Alchemist’s portfolio. 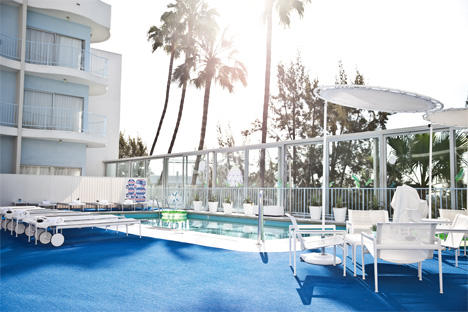 On the doorstep of the most popular section of Sunset Strip, with a million-dollar panorama view of the whole of Los ­Angeles at the back – the three most important criteria in real-estate jargon (location, location, location) are more than fulfilled by the Standard Hollywood. And even if Ian Schrager’s Hotel ­Mondrian is just a few steps up the street and the legendary nearby Chateau Marmont exudes a tad more glamour, when it comes to hipness they can’t beat the Standard. Architectonically the house is reminiscent of a sixties motel, a look that was taken up in the interior and applied consistently throughout. The 24/7 restaurant is fitted out in the style of a classic sixties American diner. Thanks to its generous opening hours it’s a favourite amongst guests who have had far to travel and are still struggling with jetlag. The hotel attracts a young, international and illustrious clientele. Australian models, German newcomer directors and Scandinavian indie bands wander in and out. The rooms are decorated in a retro-futuristic style, not exactly run-of-the-mill for this price category, and come in ‘relatively large’, ‘large’ or ‘very large’. These spatial excesses allow for daring designer flourishes like the dominant Andy Warhol prints on the curtains. The rooms facing the pool are absolute favourites, as they all have balconies and afford fantastic panorama views over Los Angeles. There is another branch of the hotel group downtown, the roof terrace of which is a central meeting point for the local nightlife.

Palihotel & The Hart And The Hunter 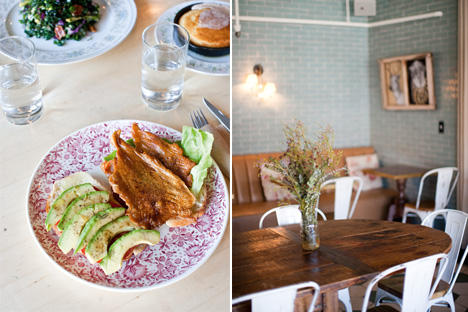 Kentucky meets California. Located on the ground floor of the cool Palihotel on Melrose Avenue is another hidden gem of the local gastro scene. The two owners and chefs Brian Dunsmoor and Kris Tominaga combine South American recipes with European classics and modern US classics in a refreshing way. “Country food” is what the two of them call their culinary concept, and they’ve also applied it to the interiors: old-fashioned tiled walls, eclectic mixes of flowery crockery, a large wooden table in the centre of the room: the shabby-chic aesthetic of the location delightfully complements the attitude of the owners and the staff. One would be forgiven for thinking you were at a private gathering rather than at a commercial restaurant. A feeling that the hip clientele really rate highly on the commercialised Los Angeles scene. So on any given night you can be sure that The Hart and the Hunter is packed to the rafters. Which means you might need a little patience because the guys adhere strictly to the ‘first come, first served’ rule and don’t even take reservations.