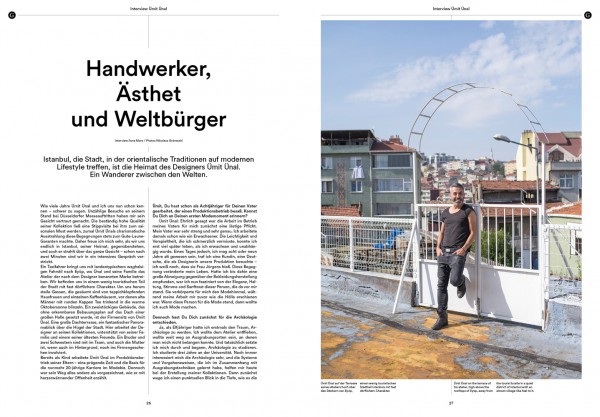 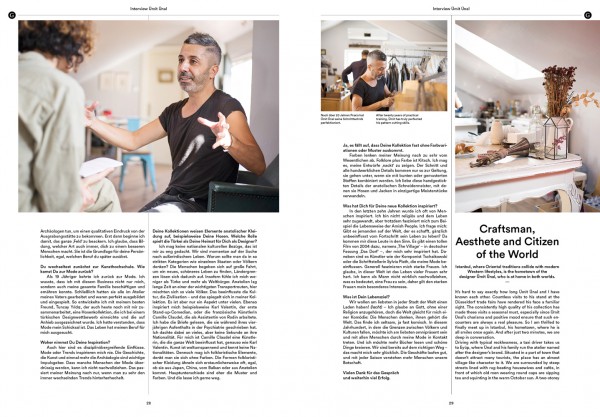 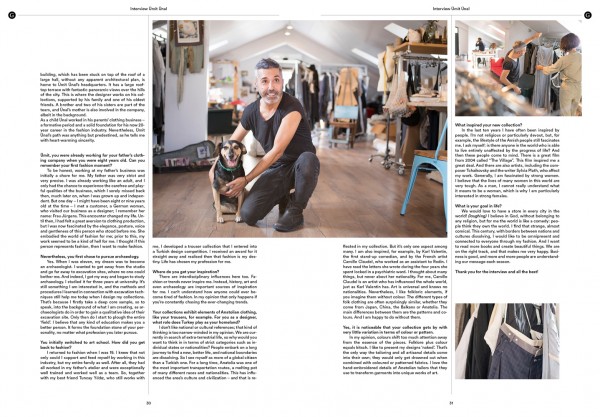 Craftsman,
Aesthete and Citizen
of the World

Istanbul, where Oriental traditions collide with modern Western lifestyles, is the hometown of the designer Ümit Ünal, who is at home in both worlds.

It’s hard to say exactly how long Ümit Ünal and I have known each other. Countless visits to his stand at the Düsseldorf trade fairs have rendered his face a familiar sight. The consistently high quality of his collection has made these visits a seasonal must, especially since Ümit Ünal’s charisma and positive mood ensure that such encounters are always a real pleasure. So I am thrilled to finally meet up in Istanbul, his hometown, where he is all smiles once again. And after just two minutes, we are deep in conversation.

Driving with typical recklessness, a taxi driver takes us to Eyüp, where Ünal and his family run the atelier named after the designer’s brand. Situated in a part of town that doesn’t attract many tourists, the place has an almost village-like character to it. We are surrounded by steep streets lined with rug-beating housewives and ­cafés, in front of which old men wearing round caps are sipping tea and squinting in the warm October sun. A two-storey building, which has been stuck on top of the roof of a large hall, without any apparent architectural plan, is home to Ümit Ünal’s headquarters. It has a large rooftop terrace with fantastic panoramic views over the hills of the city. This is where the designer works on his collections, supported by his family and one of his oldest friends. A brother and two of his sisters are part of the team, and Ünal’s mother is also involved in the company, albeit in the background.

As a child Ünal worked in his parents’ clothing business – a formative period and a solid foundation for his now 20-year career in the fashion industry. Nevertheless, Ümit Ünal’s path was anything but predestined, as he tells me with heart-warming sincerity.

Ümit, you were already working for your father’s clothing company when you were eight years old. Can you remember your first fashion moment?
To be honest, working at my father’s business was initially a chore for me. My father was very strict and very precise. I was already working like an adult, and I only had the chance to experience the carefree and playful qualities of the business, which I sorely missed back then, much later on, when I was grown up and independent. But one day – I might have been eight or nine years old at the time – I met a customer, a German woman, who visited our business as a designer; I remember her name: Frau Jürgens. This encounter changed my life. Until then, I had felt a great aversion to clothing production, but I was now fascinated by the elegance, posture, voice and gentleness of this person who stood before me. She embodied the world of fashion for me; prior to this, my work seemed to be a kind of hell for me. I thought if this person represents fashion, then I want to make fashion.

Nevertheless, you first chose to pursue archaeology.
Yes. When I was eleven, my dream was to become an archaeologist. I wanted to get away from the studio and go far away to excavation sites, where no one could bother me. And indeed, I got my way and began to study archaeology. I studied it for three years at university. It’s still something I am interested in, and the methods and procedures I learned in connection with excavation techniques still help me today when I design my collections. That’s because I firstly take a deep core sample, so to speak, into the background of what I am creating, as archaeologists do in order to gain a qualitative idea of their excavation site. Only then do I start to plough the entire ‘field’. I believe that any kind of education makes you a better person. It forms the foundation stone of your personality, no matter what profession you later pursue.

You initially switched to art school. How did you get back to fashion?
I returned to fashion when I was 19. I knew that not only could I support and feed myself by working in this industry, but my entire family as well. After all, they had all worked in my father’s atelier and were exceptionally well trained and worked well as a team. So, together with my best friend Tuncay Yıldız, who still works with me, I developed a trouser collection that I entered into a Turkish design competition. I received an award for it straight away and realised then that fashion is my destiny. Life has chosen my profession for me.

Where do you get your inspiration?
There are interdisciplinary influences here too. Fashion or trends never inspire me. Instead, history, art and even archaeology are important sources of inspiration for me. I can’t understand how anyone could ever become tired of fashion. In my opinion that only happens if you’re constantly chasing the ever-changing trends.

Your collections exhibit elements of Anatolian clothing, like your trousers, for example. For you as a designer, what role does Turkey play as your homeland?
I don’t like national or cultural references; that kind of thinking is too narrow-minded in my opinion. We are currently in search of extra-terrestrial life, so why would you want to think in in terms of strict categories such as individual states or nationalities? People embark on a long journey to find a new, better life, and national boundaries are dissolving. So I see myself as more of a global citizen than a Turkish one. For a long time, Anatolia was one of the most important transportation routes, a melting pot of many different races and nationalities. This has influenced the area’s culture and civilization – and that is reflected in my collection. But it’s only one aspect among many. I am also inspired, for example, by Karl Valentin, the first stand-up comedian, and by the French artist Camille Claudel, who worked as an assistant to Rodin. I have read the letters she wrote during the four years she spent locked in a psychiatric ward. I thought about many things, but never about her nationality. For me, Camille Claudel is an artist who has influenced the whole world, just as Karl Valentin has. Art is universal and knows no nationalities. Nevertheless, I like folkloric elements, if you imagine them without colour. The different types of folk clothing are often surprisingly similar, whether they come from Japan, China, the Balkans or Anatolia. The main differences between them are the patterns and colours. And I am happy to do without them.

Yes, it is noticeable that your collection gets by with very little variation in terms of colour or pattern.
In my opinion, colours shift too much attention away from the essence of the pieces. Folklore plus colour equals kitsch. I like to present my designs ‘naked’. That’s the only way the tailoring and all artisanal details come into their own; they would only get drowned out when combined with coloured or patterned fabrics. I love the hand-embroidered details of Anatolian tailors that they use to transform garments into unique works of art.

What inspired your new collection?
In the last ten years I have often been inspired by people. I’m not religious or particularly devout, but, for example, the lifestyle of the Amish people still fascinates me. I ask myself: is there anyone in the world who is able to live entirely unaffected by the progress of life? And then these people come to mind. There is a great film from 2004 called “The Village”. This film inspired me a great deal. And there are also artists, including the composer Tchaikovsky and the writer Sylvia Plath, who affect my work. Generally, I am fascinated by strong women. I believe that the lives of many women in this world are very tough. As a man, I cannot really understand what it means to be a woman, which is why I am particularly interested in strong females.

What is your goal in life?
We would love to have a store in every city in the world! (laughing) I believe in God, without belonging to any religion, but for me the world is like a comedy: people think they own the world. I find that strange, almost comical. This century, with borders between nations and cultures dissolving, I would like to be omnipresent and connected to everyone through my fashion. And I want to read more books and create beautiful things. We are on the right track, and that makes me very happy. Business is good, and more and more people are understanding our message each season.

Thank you for the interview and all the best!