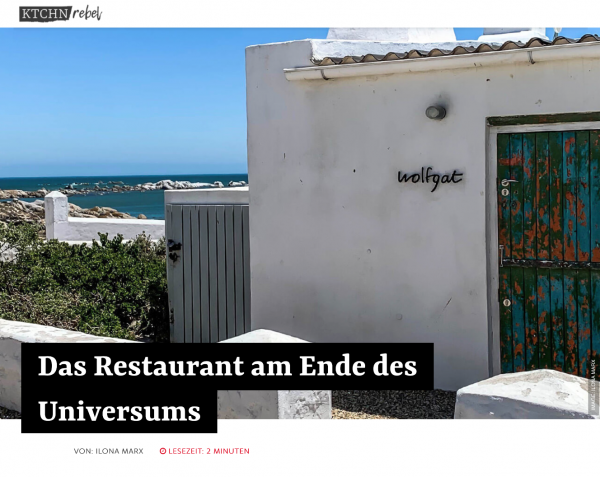 The restaurant at the end of the universe

The World’s Best Restaurant of 2019 is about as far away from glamorous metropolitan life as you can get… but here, in the South African fishing village of Paternoster, De Wolfgat creates dimensions of flavor that big-city foodies can only dream of. We sat down with Chef Kobus van der Merwe, whose gastronomic career has been catapulted to new heights in the wake of the prestigious prize.

You’d probably expect the World Restaurant Awards jury to spend most of their time jetting between big cities, rarely straying from the familiar metropolitan galaxies that most international culinary stars call home… so the fact that they’ve even heard of, let alone visited, the South African coastal village of Paternoster is striking in itself. Even more astonishing: as of February 2019, this tiny town a hundred miles or so from the Cape of Good Hope (and light-years from any glitzy big-city foodie scene) is officially home to The World’s Best Restaurant, De Wolfgat.

Paternoster, a fishing village with a population of barely two thousand, has two main attractions. One is the golden, sandy beach, where in spring you can watch hundreds of humpbacked whales swim past, gorging themselves on an abundant buffet of krill. The other is De Wolfgat, a small and unassuming 20-person establishment in what was once a fishing hut, with a terrace overlooking the windswept dunes lining the coast.
“This strip of coastline has a rich history, stretching back to ancient civilization,” says Kobus van der Merwe. “That really inspires us. And the San, the indigenous people here, really know a lot about edible wild plants.” The chef, blond-bearded and compact in stature, has just returned from his usual early-morning gathering rounds. As he finishes stashing today’s treasures – dune spinach and field cabbage – away in the restaurant’s mini-kitchen, his gaze shifts into the distance, sweeping across the Cape Dutch cottages dotting a landscape that, thanks to him, is the newest star on the world’s gourmet map. “I always create my menus intuitively,” he says. “The West Coast has a totally unique flora, the ‘Strandveld Fynbos,’ which changes a great deal with the seasons. So the menu varies with the seasons and the weather, depending on what I find on my daily field trips.”
Van der Merwe describes his culinary style as “hyperlocal Strandveld cuisine.” His innovative techniques, his focus on sustainable food, and his extensive use of local ingredients – most of which are from right here in Paternoster – are what make the food at De Wolfgat so special. “We serve dishes here that a lot of people have never tried before – indigenous succulents and herbs, for example – and we serve most of them raw or only minimally altered,” explains the chef, who was a journalist before starting his restaurant career. “Our food is deliberately non-industrial.”

De Wolfgat’s name translates to “The Wolf Cave,” referencing an actual cave of the same name whose entrance is directly beneath the terrace; the menu is written in Afrikaans, with brief descriptions accompanied by the Latin names of the plants featuring in the dishes. There’s crisp pan-fried squid on a kapokbos (or wild rosemary) skewer, and an amuse gueule consisting of a creamy white mussel served buttermilk-breaded in its own shell, followed by strandsalie (wild sage), seebamboes (sea bamboo), and sampioen (mushrooms). A wooden bowl of butter beans (heerenbone in Afrikaans), field cabbage (veldkool), dune spinach (duinespinasie), and roasted pumpkin seeds precedes a custard of black mussels with coconut, wild garlic, and apricots. The simple, unpretentious presentation of the food is part of the philosophy: dishes are served on rustic ceramic, wooden bowls, and even locally found stones.
Kobus van der Merwe strolls placidly from one table to the next, generous in equal measures with his time and his wine refills. He shares his knowledge of the ingredients in the dishes, and gives diners tips on things to see and do in the area. This, along with the unusual food itself, is clearly a big reason for his success: van der Merwe is just doing his own thing, and people can’t help loving him for it. De Wolfgat is booked solid for more than three months; reservations for the next available day open every night at midnight, and they’re always snapped up within minutes.

Foodie fans and tourists traveling to Paternoster on shorter notice often head instead for Oep de Koep, the nearby deli and this-and-that shop run by van der Merwe’s mother, where the chef first discovered his passion for cooking. Oep de Koep is now drawing more and more on the younger van der Merwe’s culinary ideas, and is enjoying increasing popularity as well. Who knows? Perhaps in a few years we’ll be talking about two stars on Paternoster’s gastronomic horizon.