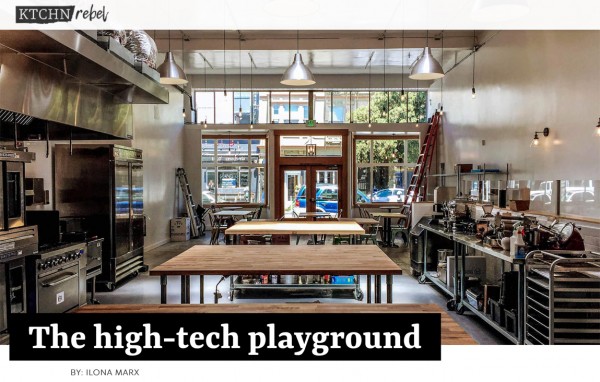 The Bay Area is known as fertile ground, both literally and figuratively: besides being ideal for cultivating vegetables or wine grapes, it’s also the perfect place to “plant the seeds” for new technology ideas or food trends. Plenty of tech-heads live in the greater San Francisco area (think Silicon Valley), and the many trendsetting restaurants in and around the city— not least Chez Panisse in Berkeley, where the legendary Alice Waters helped launch the slow food movement—are a testament to local powers of culinary innovation.

Tinker Kitchen brings technology and gastronomy together, and the project is proof positive that San Francisco is the place where new ideas can become reality. In essence, Tinker Kitchen is a coworking space for cooking aficionados, a place where anyone from technology-obsessed hobby cooks to professional chefs can try culinary experiments that would never be possible without the cutting-edge equipment it provides.

The space’s collection of “toys” includes a German-made combi-oven that allows independent regulation of temperature, moisture, and air circulation; a pasta press; a centrifuge for extracting liquids; a coffee roaster; a low-temperature cooker; wok burners; and several varieties of chocolate and ice cream machines. They’ll soon be joined by a rotary evaporator, or distilling machine, as well. That’s a lot of electrical gadgetry, especially considering that most appliances are scaled for the commercial kitchens they’re designed to be used in. Even so, the nearly 1750-square-foot facility still provides enough room for users to dine together in comfort, which was one of founder Dan Mills’ prerequisites when selecting a space.

The 22nd Street location itself was a deliberate choice, too: the Mission District is the creative soul of San Francisco, and Valencia Street, just around the corner, is its main artery. Another bonus: the Mission Mercado farmers’ market is practically on their doorstep.

“Tinker Kitchen is an ‘Open Space’; we want our customers to be able to just drop in whenever they like.” Dan Mills is a cooking enthusiast, and as a former programmer, he’s also a devout tech fan. “I’m a nerd,” he laughs. “For people with my background, the process is at least as interesting as the end result, which is where my passion for high-end kitchen appliances comes from.”

On this culinary playground, it’s all about learning by doing. Whether it’s about recombining ingredients—substituting other liquids for water when making pasta dough, for example—or playing with unusual cooking “tools” like liquid nitrogen, there’s practically infinite room for experimentation. “The sky’s the limit,” says Dan Mills, who’s looking forward to all the great ideas that his new cooking community will come up with in the future.

For thirty dollars a day, inquisitive culinary minds get access to Tinker Kitchen’s entire range of high-tech equipment, and they can even bring a friend. Those who want regular, flexible access to the space can pay $125 for a monthly membership, which also gets them a discount on special events and courses offered on-site. Larger groups of up to 40 people can also rent the entire place, for example for team-building exercises—which are commonplace in neighboring Palo Alto.

“Shared workspaces for commercial cooking already exist,” Mills explains. Tinker Kitchen, on the other hand, is intended for non-commercial use. “Professional chefs are welcome to come here and try things out, experiment on their own, but we don’t want people churning out ready-to-sell products in series here. Our goal is to bring people together who want to explore the ever-growing range of technical options at a non-commercial level. And it’s more fun in a group, because you can all inspire and help one another.” To make sure that neither technical difficulties nor boring clean-up jobs spoil that fun, the facility has personnel on hand to provide practical support or answer questions. And the service doesn’t end there: for a small fee, users can store food in Tinker Kitchen fridges and pantries, and the staff will even purchase ingredients on request.

The idea first came into being in 2015. “I was racking my brain, trying to figure out how to fit yet another high-tech kitchen appliance into my own living room,” Dan Mills. Enough was finally enough. “I have to admit, though, I thought it would be easier. I figured I’d just buy a couple appliances and rent a space, and that would be that.” But Mills wasn’t factoring city authorities into his equation, who put him through quite a bit of bureaucratic red tape. Creating the right environment—as in, having commercial-grade gas and electrical lines installed—took some time as well.

Three years and $450,000 later, Tinker Kitchen finally opened its doors this fall. Most of that money came from Mills’ friends and family, but thanks to a Kickstarter campaign, he was able to invest $20,000 of his own capital. Now that his biggest experiment yet is up and running, it remains to be seen if he’ll find enough like-minded people in San Francisco to help the idea take flight. After all, where if not here?