← PrevKTCHNrebel - From Waste to Taste
Next →J'N'C – Interview G-Star Raw 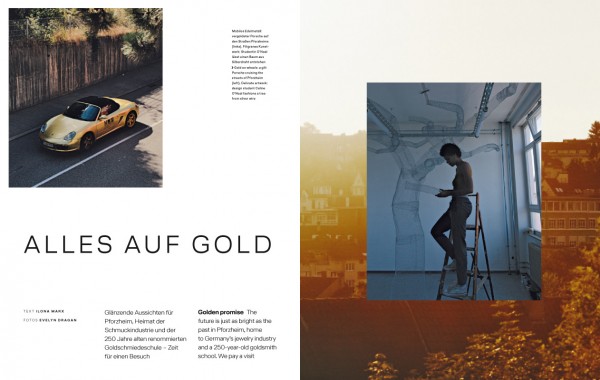 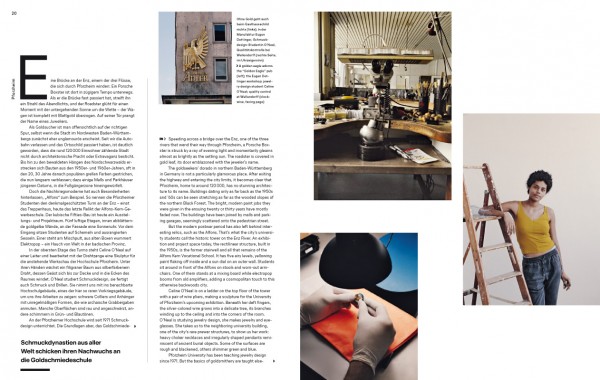 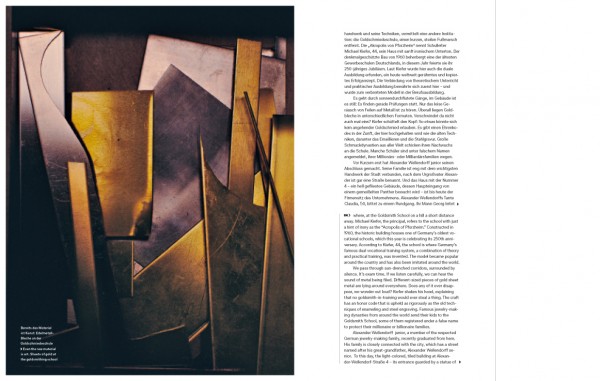 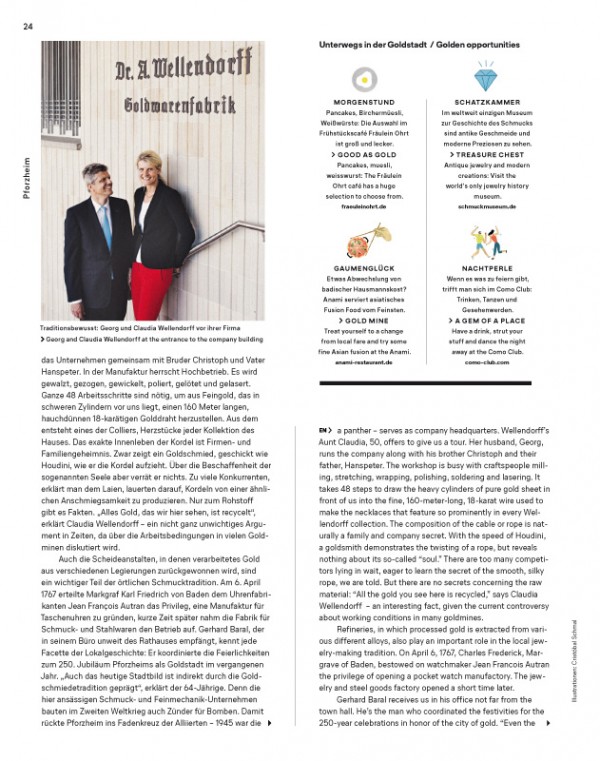 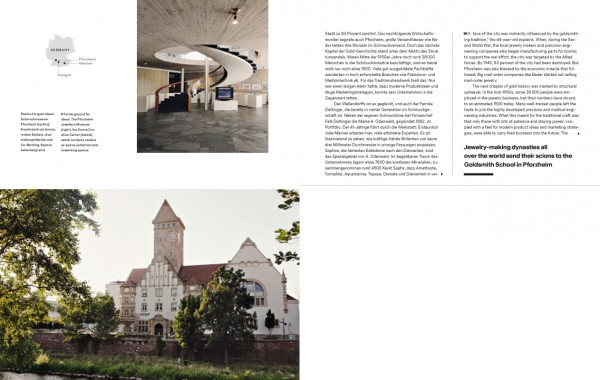 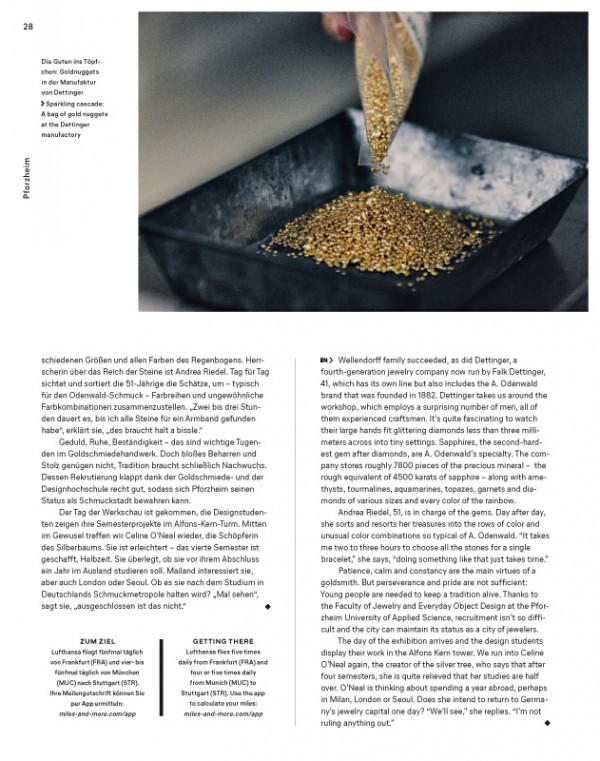 Speeding across a bridge over the Enz, one of the three rivers that wend their way through Pforzheim, a Porsche Boxster is struck by a ray of evening light and momentarily gleams almost as brightly as the setting sun. The roadster is covered in gold leaf, its door emblazoned with the jeweler’s name.

The goldseekers’ dorado in northern Baden-Württemberg in Germany is not a particularly glamorous place. After exiting the highway and entering the city limits, it becomes clear that Pforzheim, home to around 120 000, has no stunning architecture to its name. Buildings dating only as far back as the 1950s and ’60s can be seen stretching as far as the wooded slopes of the northern Black Forest. The bright, modern paint jobs they were given in the ensuing twenty or thirty years have mostly faded now. The buildings have been joined by malls and parking garages, seemingly scattered onto the pedestrian street.

But the modern postwar period has also left behind interesting relics, such as the Alfons. That’s what the city’s university students call the historic tower on the Enz River. An exhibition and project space today, the rectilinear structure, built in the 1950s, is the former stairwell and all that remains of the Alfons Kern Vocational School. It has five airy levels, yellowing paint flaking off inside and a sun dial on an outer wall. Students sit around in front of the Alfons on stools and worn-out armchairs. One of them stands at a mixing board while electropop booms from old amplifiers, adding a cosmopolitan touch to this otherwise backwoods city.

Celine O’Neal is on a ladder on the top floor of the tower with a pair of wire pliers, making a sculpture for the University of Pforzheim’s upcoming exhibition. Beneath her deft fingers, the silver-colored wire grows into a delicate tree, its branches winding up to the ceiling and into the corners of the room. O’Neal is studying jewelry design, she makes jewelry and eyeglasses. She takes us to the neighboring university building, one of the city’s rare prewar structures, to show us her work: heavy choker necklaces and irregularly shaped pendants reminiscent of ancient burial objects. Some of the surfaces are rough and blackened, others shimmer green and blue.

Pforzheim University has been teaching jewelry design since 1971. But the basics of goldsmithery are taught elsewhere, at the Goldsmith School on a hill a short distance away. Michael Kiefer, the principal, refers to the school with just a hint of irony as the “Acropolis of Pforzheim.” Constructed in 1960, the historic building houses one of Germany’s oldest vocational schools, which this year is celebrating its 250th anniversary. According to Kiefer, 44, the school is where Germany’s famous dual vocational training system, a combination of theory and practical training, was invented. The model became popular around the country and has also been imitated around the world.

We pass through sun-drenched corridors, surrounded by silence. It’s exam time. If we listen carefully, we can hear the sound of metal being filed. Different-sized pieces of gold sheet metal are lying around everywhere. Does any of it ever disappear, we wonder out loud? Kiefer shakes his head, explaining that no goldsmith-in-training would ever steal a thing. The craft has an honor code that is upheld as rigorously as the old techniques of enameling and steel engraving. Famous jewelry-making dynasties from around the world send their kids to the Goldsmith School, some of them registered under a false name to protect their millionaire or billionaire families.

Alexander Wellendorff  junior, a member of the respected German jewelry-making family, recently graduated from here. His family is closely connected with the city, which has a street named after his great-grandfather, Alexander Wellendorff senior.  To this day, the light-colored, tiled building at Alexander-Wellendorf-Straße 4 – its entrance guarded by a statue of a panther – serves as company headquarters. Wellendorff’s Aunt Claudia, 50, offers to give us a tour. Her husband, Georg, runs the company along with his brother Christoph and their father, Hanspeter. The workshop is busy with craftspeople milling, stretching, wrapping, polishing, soldering and lasering. It takes 48 steps to draw the heavy cylinders of pure gold sheet in front of us into the fine, 160-meter-long, 18-karat wire used to make the necklaces that feature so prominently in every Wellendorff collection. The composition of the cable or rope is naturally a family and company secret. With the speed of Houdini, a goldsmith demonstrates the twisting of a rope, but reveals nothing about its so-called “soul.” There are too many competitors lying in wait, eager to learn the secret of the smooth, silky rope, we are told. But there are no secrets concerning the raw material: “All the gold you see here is recycled,” says Claudia Wellendorff – an interesting fact, given the current controversy about working conditions in many goldmines.

Refineries, in which processed gold is extracted from various different alloys, also play an important role in the local jewelry-making tradition. On April 6, 1767, Charles Frederick, Margrave of Baden, bestowed on watchmaker Jean Francois Autran the privilege of opening a pocket watch manufactory. The jewelry and steel goods factory opened a short time later.

Gerhard Baral receives us in his office not far from the town hall. He’s the man who coordinated the festivities for the 250-year celebrations in honor of the city of gold. “Even the face of the city was indirectly influenced by the goldsmithing tradition,” the 64-year-old explains. When, during the Second World War, the local jewelry makers and precision engineering companies also began manufacturing parts for bombs to support the war effort, the city was targeted by the Allied forces. By 1945, 83 percent of the city had been destroyed. But Pforzheim was also blessed by the economic miracle that followed: Big mail-order companies like Bader started out selling mail-order jewelry.

The next chapter of gold history was marked by structural upheaval. In the mid-1950s, some 38 000 people were employed in the jewelry business, but their numbers have shrunk to an estimated 1500 today. Many well-trained people left the trade to join the highly developed precision and medical engineering industries. What this meant for the traditional craft was that only those with lots of patience and staying power, coupled with a feel for modern product ideas and marketing strategies, were able to carry their business into the future. The Wellendorff family succeeded, as did Dettinger, a fourth-generation jewelry company now run by Falk Dettinger, 41, which has its own line but also includes the A. Odenwald brand that was founded in 1882. Dettinger takes us around the workshop, which employs a surprising number of men, all of them experienced craftsmen. It’s quite fascinating to watch their large hands fit glittering diamonds less than three millimeters across into tiny settings. Sapphires, the second-hardest gem after diamonds, are A. Odenwald’s specialty. The company stores roughly 7800 pieces of the precious mineral –  the rough equivalent of 4500 karats of sapphire – along with amethysts, tourmalines, aquamarines, topazes, garnets and diamonds of various sizes and every color of the rainbow.

Andrea Riedel, 51, is in charge of the gems. Day after day, she sorts and resorts her treasures into the rows of color and unusual color combinations so typical of A. Odenwald. “It takes me two to three hours to choose all the stones for a single bracelet,” she says, “doing something like that just takes time.”

Patience, calm and constancy are the main virtues of a goldsmith. But perseverance and pride are not sufficient: Young people are needed to keep a tradition alive. Thanks to the Faculty of Jewelry and Everyday Object Design at the Pforzheim University of Applied Science, recruitment isn’t so difficult and the city can maintain its status as a city of jewelers.

The day of the exhibition arrives and the design students display their work in the Alfons Kern tower. We run into Celine O’Neal again, the creator of the silver tree, who says that after four semesters, she is quite relieved that her studies are half over. O’Neal is thinking about spending a year abroad, perhaps in Milan, London or Seoul. Does she intend to return to Germany’s jewelry capital one day? “We’ll see,” she replies. “I’m not ruling anything out.”

← PrevKTCHNrebel - From Waste to Taste
Next →J'N'C – Interview G-Star Raw