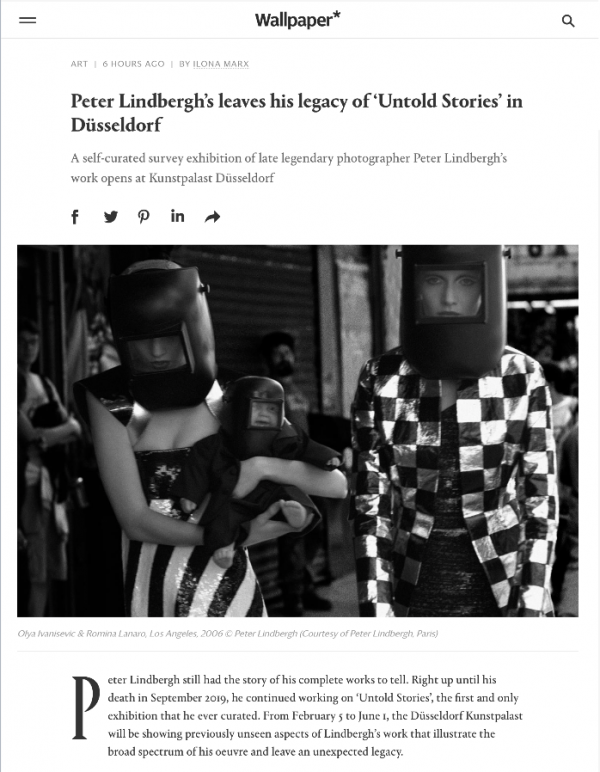 Peter Lindbergh still had the story of his complete works to tell. Right up until his death in September 2019, he continued working on the exhibition ‘Untold Stories’, the first and only works exhibition that he ever curated. From February 5 to June 1, 2020, the Düsseldorf Kunstpalast will be showing previously unseen aspects of Lindbergh’s work that illustrate the broad spectrum of his oeuvre. And leave an unexpected legacy.

Peter Lindbergh was a great photographic narrator. The epic black-and-white picture series that he conjured, with wide beaches, urban canyons, factory sites or gloomy harbour districts as backdrops, were celebrated in endless spreads in magazines like Vogue and Harper’s Bazaar. Claudia, Tatjana, Linda, Christy, Naomi – the German photographer transformed models into brands and women into icons. The world of fashion all agreed: Peter Lindbergh’s photographs changed the world, and the image of femininity he defined in the early nineties in the shape of the open, natural and adventurous woman has lost none of its relevance to this day.

But how did he see his own work? Didn’t the person on the other side of the lens mean much more to him than fashion, the supposed context of his life’s work? Lindbergh’s sensual images, imbued with intimacy and trust, suggest this was the case. What would he present to his audience as his best works? No one had ever asked him that, until Felix Krämer, the director of the Düsseldorf Kunstpalast since 2017, gave the photographer carte blanche for an exhibition. Lindbergh didn’t want to call it a retrospective. He still felt too young for it, the 72-year-old jokingly said in 2017.

In the two following years, Peter Lindbergh combed his archives, to pick out ten dozen from all the hundreds of thousands of photographs that were most important to him. Photographs that he had never shown before played a significant role. Uma Thurman, lying in half shade, 2016, an unstyled dark-haired Claudia Schiffer from 1997 and Naomi Campbell in 2000 in Ibiza, with facial scars, uncovered by make up. But some of his world famous images are also part of the show. “It was like grappling with life and death,” Lindbergh is quoted as saying in July 2019, in the exhibition catalogue. Which goes some way to explaining how hard it must have been for him to make the final selection. Lindbergh, who had always been so energetic, could not have guessed how quickly death would catch up on him. Or perhaps he did. “Testament” is the title of the part of his show that reveals an atypical side of the German photographer. More than ever he crossed beyond the boundaries of the context of fashion photography and contemporary art. The video work from 2014 shows a death row inmate who gazes at himself in the mirror for 30 minutes. The film is moving, and the gaze of the inmate is difficult to bear. Also as a documentarist beyond the world of fashion, Lindbergh reveals human frailty but without exposing it. Introspection, expression, empathy and freedom were the themes that he was concerned with all his life. “Essentially, the film deals with the impossibility of being truly free,” he said in an interview with Felix Krämer. The Duisburg-born photographer was also a political person; he wanted to penetrate beneath the surface, which becomes particularly palpable in “Testament”. As one of the previously unseen works, “Testamant” is one of the “untold stories” that gives the exhibition in Kunstpalast Düsseldorf its name. In the last few weeks of his life Lindbergh had been working on this retrospective, finishing it exactly six days before his death. The fact that he gave so much space in particular to this work could well be Lindbergh’s true legacy.

What is fashion photography? What should it be? Lindbergh was confronting these questions until shortly before his death. With his most personal exhibition to date, he now passes these questions on to his audience.