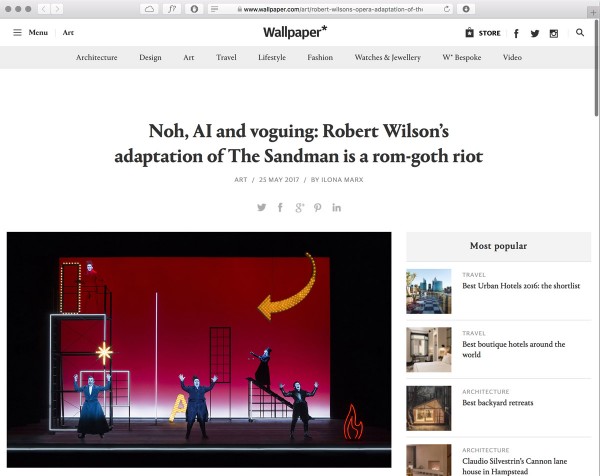 “I want to be a machine”

“I want to be a machine” – Robert Wilson’s adaptation of The Sandman by E.T.A. Hoffmann garnered him standing ovations in Düsseldorf.

To transcend the human by aesthetic means – this striving is something the American director Robert Wilson has in common with the late Andy Warhol. After the world premiere at the Ruhrfestspiele Recklinghausen, who co-produced it, Wilson’s adaptation of The Sandman had its debut in Düsseldorf on Saturday.

Oh Olimpia! It is the beautiful man-machine, which Nathanael falls for and soon feels a connection with, greater than with his flesh and blood fiancée. But not only the protagonist in The Sandman navigates a fine line between desire and delusion; Robert Wilson admits to sharing a fascination with the mechanical masterpiece, the lifelike doll. And you believe him immediately: in each one of his productions a character appears, that resembles Olimpia. A cool, perfect and elegant exterior, which Wilson imbues with the shimmering breath of life with his stunning highly visual theatre.

Another leitmotif of the black romantic Gothic tale is also firmly rooted in the director’s work: the eyes. Nathanael is traumatised by the tragic death of his father, as he is by the grisly bedtime story of the Sandman, which his mother used to tell him often. The Sandman would scatter grains of sand into the eyes of children who would not sleep, until their eyes fell bloody from their heads, the story goes. Wilson has staged E.T.A. Hoffmann’s ambiguous play as a tragi-comic grusical, in which the cool aesthetics of the multitasking Wilson (director, lighting, stage) once again prove that Wilson truly is a man of the visual. Critics accuse him of superficiality, but the 75-year-old counters: “The horror may well be lurking behind a smooth facade. And is all the more sinister for it.”

The perfection for which Wilson is known, makes his The Sandman a sensual experience as well. His light design, his handling of space and time transcend reality. “Without light there is no space,” he quotes Einstein and explains his deep preoccupation with the subject. The stage design developed by him for the Düsseldorf production has only minimal props, but the fluorescent lighting fully makes up for it. – In the beginning, there was light.

Wilson starts by rehearsing his plays as though they were silent films, whose gestures appeal to him. “I reject naturalistic representation. The mimetics – and gesture-laden staging of Asian mask theatre like Bian Lian and Japanese Noh is much more to my liking.” No wonder that it isn’t the script in Wilson’s The Sandman that plays the main role. Repetitions of individual passages reinforce the surrealism of the key scenes, the precise body language of the actors is almost staccato-like. Outstanding: Nathanael (Christian Friedel: silly, hysterical and mysterious) and his mother (Rosa Enskat: funny) – they beguile with their entrancingly doll-like performances while surprising with their vocal power.

The music is written by young British singer-songwriter Anna Calvi, who has found international renown with her music. The score, composed specially for The Sandman is a stark contrast to the stiff Biedermeier look of the costumes. The musical reminiscences range from new wave to new romantic. In combination with the exalted movements of the actors and their mask-like make-up it evokes memories of voguing, a dance style from 1980s New York that is the embodiment of all that is superficial and narcissistic.

E.T.A. Hoffmann’s play has certainly not lost any of its topicality. In the age of virtual reality, of Second Life, avatars, cyborgs and bots, the play is surprisingly relevant, despite having been written two hundred years ago, discernable in the young average age of the premiere audience. The public voiced their opinions in the form of standing ovations – and in return they were offered a rendition of the secret title song of the evening “There will be a horror” by the ensemble. Even the composer Anna Calvi, who was personally present at the premiere, pitched in, and even Robert Wilson joined the choir.