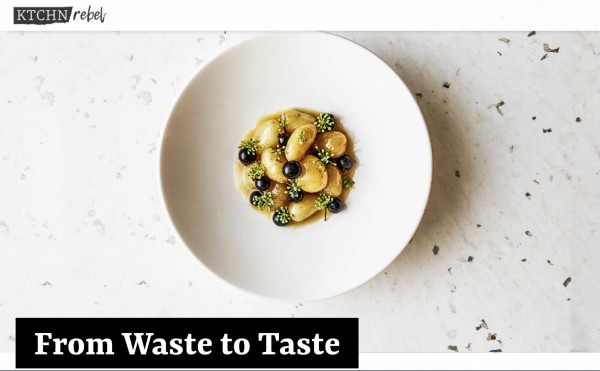 From Waste to Taste

Douglas McMaster: brilliant, uncompromising, uses a lot of superlatives. Also, kind of a rock star. His first restaurant, Silo, which opened in Brighton in 2014, takes the “zero waste” idea to new heights. Since September 2017, the 31-year-old British chef has been outdoing even himself.
At Cub, his newest project in London, Douglas McMaster transforms ingredients many consider unusable into Michelin star-worthy delicacies. Japanese knotweed, for example, is a rhubarb-like invasive species that gives property owners nightmares, but at Cub you’ll find it gracing both plates and cocktail glasses. “Heaps Mad Shit” is how Douglas McMaster and his partner in crime, legendary mixologist Ryan Chetiyawardana (aka Mr. Lyan), describe their creations. As McMaster tells it, his “soulmate” Chetiyawardana was the one to suggest the two of them open a bar and restaurant together.
He sat down with us over a late lunch—a plateful of soft-boiled vegetables left over after preparing a stock—to tell us about the philosophy at their new restaurant, and about his most recent efforts in the battle against food waste.

Douglas, you opened Silo five years ago as a zero-waste restaurant, and then a year ago you started Cub in London. What’s the concept at your new place?
If Silo’s a tree, Cub is a branch on it. The zero-waste idea isn’t front and center at Cub; rather, our focus is on taking ingredients people think of as “inelegant” or even unfit for consumption, and turning them into gourmet dishes. For example, whey, which is a byproduct of the cheesemaking process, is one of our favorite ingredients, and we’re also big on seaweeds, knotweed, and other types of weeds. We also use root vegetables, beets, carrots, potatoes… things farmers ate in the Middle Ages. Our multi-course menus pair dishes using those ingredients with cocktails created by Mr. Lyan, who uses the same approach we do in the kitchen.

You’re one of the most famous proponents of the zero-waste philosophy. Do you plan on applying it at Cub eventually, too?
Sure, but it’s a time-consuming process. You have to find suppliers who are willing to ship their products in reusable containers. Establishing that type of infrastructure for all of your ingredients takes about a year, I’d say.

You’re only thirty-one, but you’ve already built up an astonishing resume. When you were 21, you set off on a three-year globetrotting journey, working at some of the best restaurants in the world. How did that come about for you?
In 2009, I took part in a BBC competition and ended up being named Great Britain’s best young chef. Receiving the award was almost like a drug, it was my starting shot— suddenly, the world was my oyster.

And you took seized the opportunity…
Yeah, I made pilgrimages to the best restaurants in the world, to work at them for however long— sometimes a day, sometimes a week, sometimes six months. After I finished my culinary training in St. John, I just wanted to get as much experience as possible here in London, where they use the nose-to-tail cooking philosophy. I wanted to see how the world’s most successful chefs work.

Nowadays, chefs around the world are looking to you as a role model. For example, how does your composting machine work? The one you use at Silo and Cub to break down organic waste?
It’s actually quite simple. It’s like the human body! A lot of composting machines are mechanical, but Bertha—that’s what we call our composter at Silo—uses microbes, bacterial cultures that multiply naturally, sort of like yeast. They break down the organic waste and turn it into compost.

One of your culinary creations even used the compost itself, right?
Yes, but that was for a special occasion— I wanted to develop a really unique dish for a London event called “Wasted” back in 2018. I cooked some carrots in a compost that Bertha made out of sixty kilos of lemons. After that, we burned the compost and smoked the carrots in it. It gave them an amazing flavor! Incidentally, the lemons came from a brewery that uses supermarket fruit considered unfit for sale.

Are you planning on doing more with the zero-waste idea at Silo?
Oh, of course. Silo is zero-waste through and through. We grind our own flour, churn butter, make yogurt. You’d think any chef would know how to do those things, but that’s not really the case. But I want to take it further than that. For example, I’d like to get away from conventional glass recycling, which uses a great deal of energy. We’re currently working on a project in that vein, one that’s extremely important to us.

Sounds interesting.
Yeah, we want to buy two machines: one that grinds old glass into sand, and one that turns the sand into powder. And then you can use the glass powder to make porcelain. The new method only requires temperatures of around 600 degrees Celsius, which is a thousand degrees lower than what you need to melt down glass. It’s like a mini-revolution, it’s the most interesting thing I’ve ever worked on. I’m really excited!

Douglas McMaster
Born in 1987 in the Northern English town of Sheffield, Douglas McMaster won a BBC competition at the age of 21 and was named Great Britain’s best young chef. In 2010, he opened up a zero-waste pop-up cafe in Sydney, Australia; two years later, he started his first zero-waste restaurant in Melbourne. After returning to his home country, the then-26-year old founded Silo in Brighton in 2014. About a year ago, Douglas McMaster finally fulfilled his dream of opening his own restaurant in London. He and his partner Ryan Chetiyawardana have been running Cub in the Shoreditch neighborhood since September of 2017.